An early photograph of the gallery entrance at the Barnes's Parkway home.

From the 1920s to the 1940s, Albert and Laura Barnes collected dozens of clocks to display in their home and the offices and galleries of the Barnes Foundation. A handful of surviving receipts suggest that they purchased the clocks locally, from antiques dealers around Philadelphia and New York City. Some of the clocks had utilitarian functions—the chiming of this pendulum-driven tall case clock, which stands by the gallery entrance, may have signaled the beginning and end of classes. But the sheer number of clocks collected by Dr. Barnes suggests he had an interest beyond timekeeping. Like the metalwork, furniture, and other decorative arts in his collection, the clocks bridge the categories of “fine” and “useful” and demonstrate profound continuities between European and American artistic traditions.

Let’s look closely at the tall case clock near the gallery entrance. Made around the turn of the 20th century, this clock has a solid oak case that encloses the chimes and pendulum, and a removable flat-top hood. The case seems to be American made, while the clock’s silvered brass face is stamped “England” at the bottom. The face features three keyholes for winding the internal weights, a chapter ring with Roman numerals for hours and Arabic numerals for minutes, and a subsidiary dial below the XII to measure seconds. Note that the Roman numeral for four is rendered as IIII, instead of IV, to visually balance the VIII on the opposite side.¹ 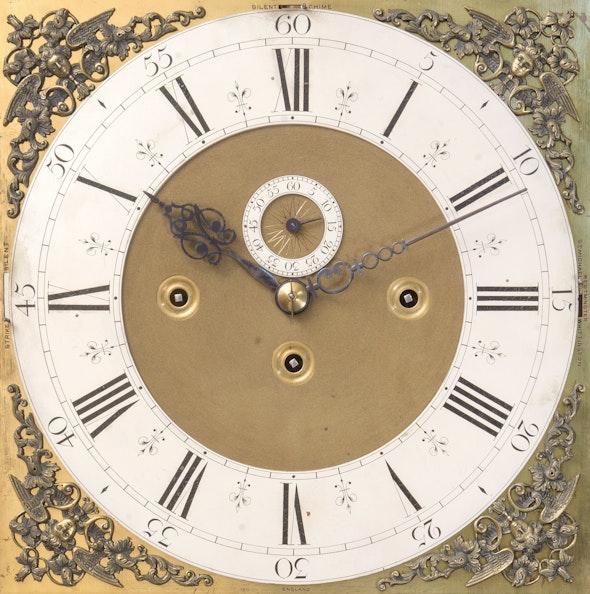 There are levers to the extreme left, right, and top of the clockface that silence the chimes and strikes or select the melody they will play: Westminster, St. Michaels, or Whittington. These, respectively, are the chimes of Big Ben and the churches of St. Michael and St. Mary-le-Bow, all in London. The Barnes clock is an eight-day clock, wound once a week by our preparators. Next time you enter the collection, take a closer look at the far right side of the clockface to see which chime you may hear. The clock plays part of the melody at each quarter hour and the full tune at the hour.

Like most tall case clocks of its time, the Barnes clock has tubular chimes—metal tubes of varying lengths that hang from the back of the case and play different notes when struck. One of these chimes is embossed “Walter H. Durfee & Co.” and dated “Nov.8.87.Sep.18.88.” Walter Durfee (1857–1939) lived in Providence, Rhode Island, and patented nickel-plated tubular chimes of exceptional quality in the 1880s. This inscription is the best clue we have for the clock’s provenance, given that Durfee would custom-fit his chimes to high-end clockworks and cases obtained from makers and distributors located principally along the East Coast.

Back then, Durfee’s tube chimes were one of the latest technological and aesthetic refinements to mechanical clocks, which had been invented in Europe during the second half of the 13th century for use in prominent churches.² (There are other clock types, however, that date from the second millennium BCE in the Near East and China.) During the Enlightenment, clocks became central to fields such as astronomy and navigation, and scientists worked with clockmakers in evolving their design.³ Tall case clocks were first made in England around 1660, following the invention of the anchor escapement—used for pendulums. These clocks quickly became popular across the world, being produced in great numbers until about 1820.⁴ 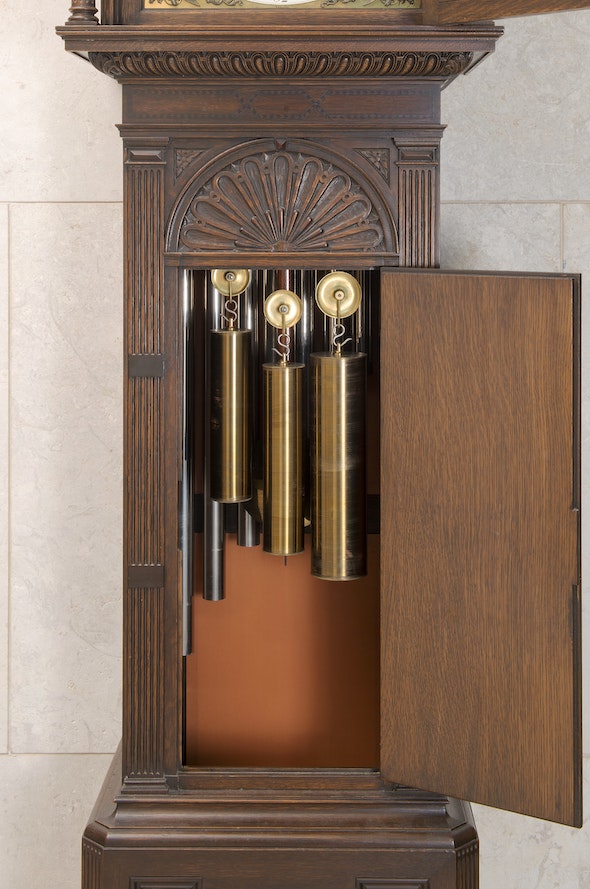 Clock cases followed popular tastes in wood furnishings, and the earliest cases were carved in classical architectural styles. Many early clocks had a Parthenon-esque portico hood with freestanding colonnettes; later, there were flat, domed, pagoda, and break-arch tops. Clocks made after 1820, for the most part, reiterated these designs.⁵ 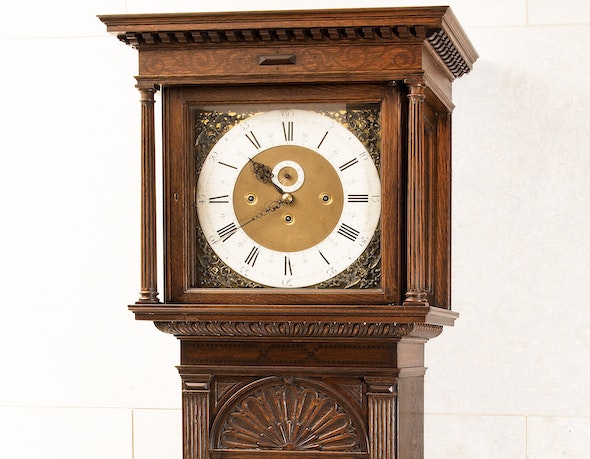 Notice the winged cherubs, on the corners, or spandrels, of the face. Such figures have a long history in clock design, and their functions were both decorative and symbolic.⁸ The figures reference the longstanding belief that angelic beings governed the movements of heaven and earth and, accordingly, time. An early example can be found on the octagonal Tower of the Winds (c. 50 BCE), in Athens, which features a sundial on each side surmounted by a winged figure representing one of the eight winds.⁹

Such figures inspired the images of angels in Christian, Jewish, and Islamic art, and likewise many medieval images (albeit mostly later Western versions) show angels as cosmic mechanics deputizing God’s will as Prime Mover, frequently in a timekeeping capacity.¹⁰ The face of one of the oldest working mechanical clocks, at Wells Cathedral in Somerset, England, portrays a model of the universe rotated by angels in the spandrels holding windbags. (The clock’s mechanics have been updated, but the original works, 1386–1392, can be found in the London Science Museum.)¹¹ 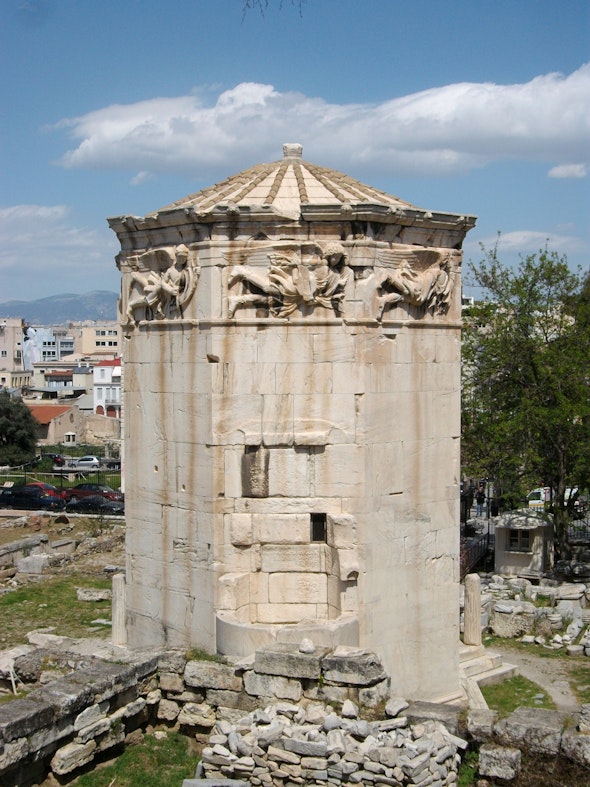 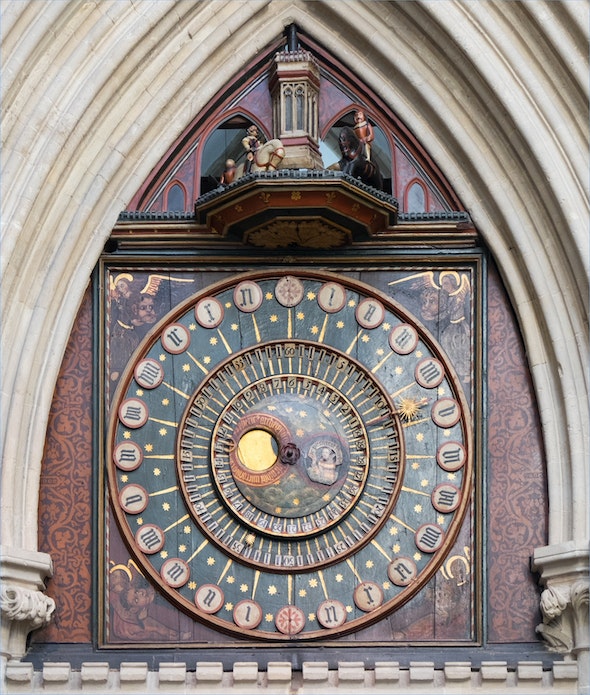 Beliefs about angelic agency in governing time and space persisted, with nuance, into early modernity,¹² intersecting with the collaboration of clockmakers and scientists and the introduction of winged figures on domestic clocks.¹³ At this time, images of angels and cherubs served as emblems of scientific authority for pioneers in fields such as physics and astronomy.¹⁴ These cherubs were not the exalted class of angels described in the Bible but rather putti, quasi-angelic figures derived from classical erotes (winged gods), most familiar to us as the chubby cupids on Valentine’s Day cards. By the 1400s, cherubs were also depicted as spiritelli(breath or winds, recalling the figures decorating the Tower of the Winds), accompanying angels in various tasks.¹⁵

The image record suggests that angels more often explained the operations of the celestial spheres while cherubs tended to be hands-on—measuring, cranking, or pumping the gears. The popularity of such images during the 17th and 18th centuries sheds light on the proliferation of cherubs on clocks. The Barnes clock—with its cherubs, Renaissance Revival case, and tube chimes—allows us to see the persistence of this fusion of technology with cultural nostalgia in modern America.¹⁶

⁷See Charlotte Gere and Michael Whiteway, Nineteenth-Century Design: From Pugin to Mackintosh (New York: Abrams, 1994), and Anna Jackson, The V&A Guide to Period Styles: 400 Years of British Design (London: V&A Publications, 2002). For an overview of the Arts and Crafts movement, including its inception in England and manifestations in America, see https://www.metmuseum.org/toah/hd/acam/hd_acam.htm, and Robert Judson Clark, The Arts and Crafts Movement in America, 1876-1916 (Princeton: Princeton University Press, 1972); Eileen Boris, Art and Labor: Ruskin, Morris, and the Craftsman Ideal in America (Philadelphia: Temple University Press, 1986); Wendy Kaplan, The Art That is Life”: The Arts and Crafts Movement in America, 1875-1920, exh. cat. (Boston: Museum of Fine Arts, 1987).

¹¹Bruton, 19. The other oldest survivals are at Salisbury Cathedral (1386, in situ) and the Rouen Gros-Horloge (1389, in situ). The Salisbury and Wells clocks were both most likely commissioned by Bishop Erghum, who was at Salisbury from 1375-1388 and Bath/Wells from 1388-1400. See Cipolla, 42-46, for more Gothic and Renaissance clocks and cosmology, at Strasbourg, Padua, and Bologna.

¹³There is a brief survey of scientists’ opinions on angelic operations in Peter Marshall and Alexandra Walsham’s introduction to Angels in the Early Modern World (Cambridge: Cambridge University Press, 2006), 34-36. N.B. Newton, among others, did profess modernized, nuanced theories of “the government of the world by angels” as physical causes.

¹⁴Nick Wilding, “Galilean Angels,” in Conversations with Angels, ed. Joad Raymond (London: Palgrave, 2011), 71-4. For instance: in 1609, Galileo presented the telescope to Venetian patricians in the campanile (angel weathervane), mirrored/developed by existing monuments: the Torre dell’Orologio and the angels swarming up and down the facade of San Marco.

¹⁵“By the 1660s [putti] have mastered the full range of new instruments, from optics to hydraulics. Jesuit iconography, especially in the workshops of Athanasius Kircher and Kaspar Scott, easily enlarged the domain of cherubic labor to include natural philosophical practice.” Wilding, 77-79. N.B. Wilding cited John Heilbron’s “Domesticating Science” essay as the authority on angelic research assistants, but Heilbron did not accurately represent the history of angelology and its applications to images--especially of putti.