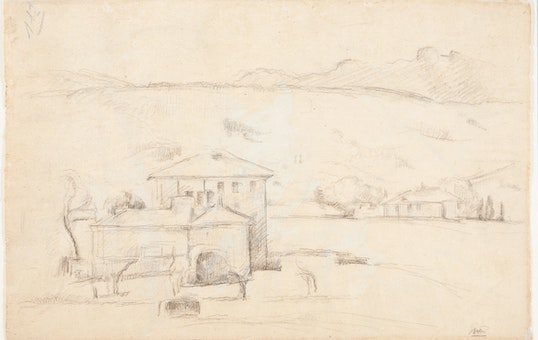 During a paper conservation treatment, the Barnes Foundation discovered two unfinished sketches—one graphite and one watercolor—on the reverse sides of two watercolors by Paul Cézanne depicting the landscape of southern France: The Chaine de l'Etoile Mountains (BF650) and Trees (BF655), normally on view in room 20 of the Collection Gallery.

The discovery marked the first time the sketches had been seen since at least the early 20th century, most likely prior to Dr. Albert Barnes's purchase of the works from Leo Stein in 1921. These sketches provide a glimpse behind Cézanne’s artistic process, and their discovery highlights the importance of conservation efforts and dedicated collection stewardship.

To allow students and visitors the opportunity to view these sketches, they were displayed in double-sided frames, with both sides visible, from April 10 through May 18, 2015, in the second-floor classroom of the Barnes Foundation. Following their display to the public, the watercolors were returned to their original locations.

It was not uncommon for Cézanne to work on both sides of the paper in his sketchbooks and on larger individual sheets such as these, and over the course of his career he produced thousands of drawings, some of which were done in preparation for oil paintings, but most often they were a place to experiment with line and color. "These sketches offer a window into Cézanne’s artistic process, which is truly invaluable," said Barbara Buckley, senior director of conservation and chief conservator of paintings at the Barnes Foundation. "It is with great excitement that we share this discovery with our students and visitors. Our new facilities on the Benjamin Franklin Parkway allow us to do much more comprehensive conservation than ever before and we know there are many more discoveries within the Barnes Collection waiting to be unearthed. We look forward to bringing them to light over the coming months and years."

"Dr. Barnes bought The Chaine de l'Etoile Mountains and Trees from Leo Stein, the American collector who, along with his sister, Gertrude, had assembled one of the world’s most important collections of modern European art," said Martha Lucy, assistant professor at Drexel University and consulting curator at the Barnes Foundation. "What Barnes probably didn’t know was that in purchasing these two watercolors from Stein, he had actually acquired four works by Cézanne."

The conservation project was overseen by Barbara Buckley. The treatments were performed by paper conservators at the Conservation Center for Art and Historic Artifacts (CCAHA) in Philadelphia and funded as part of a conservation grant from the Institute of Museum and Library Services (IMLS).

The Barnes collection includes 365 works on paper comprising primarily American and European works from the late 19th to early 20th centuries, including watercolors, gouache, pastels, ink, graphite, and charcoal drawings. The IMLS Museums for America grant program that funded the discovery of these new sketches provided for the conservation treatment of 22 watercolors and pastels on paper, including five works by Paul Cézanne, five by Pablo Picasso, nine by Paul Klee, two by Edgar Degas, and one by Pierre-Auguste Renoir. The conservation included mending tears, stabilizing supports, rehousing the works with archival quality materials, and providing ultraviolet-light-filtering protection. This is the second grant the Barnes Foundation has received from the IMLS to support the conservation treatment and rehousing of its works of art on paper.

This project was made possible in part by:

Institute of Museum and Library Services