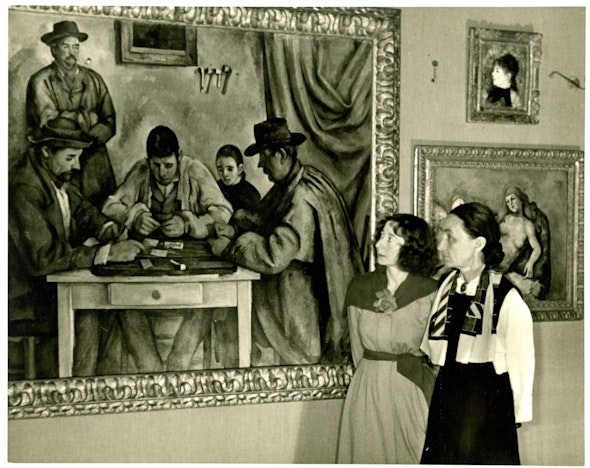 Born in Paris, Violette de Mazia (1899–1988) taught French in England before moving to Philadelphia in the early 1920s. Shortly thereafter, she began to tutor Dr. Barnes and his staff at the A. C. Barnes Company. At the same time, she enrolled in the Barnes Foundation’s course in art appreciation and philosophy.

In 1926, Dr. Barnes offered de Mazia a position at the Foundation. Over the years, she coauthored several books with Dr. Barnes and was hugely influential in the evolving educational philosophy. In 1950, shortly before Dr. Barnes’s death, de Mazia was appointed director of education for the Foundation. She served as a trustee from 1935 to 1966, when, after Mrs. Barnes’s death, she became the vice president of the Board of Trustees. De Mazia taught at the Barnes until her retirement in May 1987.

In April 2015, the Barnes and the Violette de Mazia Foundation announced a plan to affiliate their education programs and establish the Barnes–de Mazia Education Endowment Fund.

The Fund is dedicated to supporting and expanding education programs at the Barnes Foundation, including scholarships, an annual Violette de Mazia Lecture, and a fellowship for scholars to research the theories, writings, and methodology of Albert Barnes, Violette de Mazia, and John Dewey.

The Barnes is temporarily closed to the public. Click here for details.