These examples of 18th-century American glass can be found in Room 18 of the collection.

In Room 18, behind the glass doors of a Pennsylvania German cupboard, rest 54 glass objects of various shapes and sizes. Sometimes overlooked by visitors because of the location, these pieces were collected by Albert C. Barnes in the late 1930s along with other decorative objects like metalwork and furniture. The pieces vary in origin but are primarily early American; in fact, they are examples of one of the earliest craft forms to develop in the colonies. To fully appreciate the techniques used in these vessels, let's first review the history of glassmaking.

Glassmaking was invented in ancient Mesopotamia, some 4,000 years ago, when early craftsmen realized they could make glass by melting silica (sand, crushed quartz, or crushed flint). Modern glassmakers use highly refined silica, but early makers simply gathered sand from riverbeds or the seashore. Because silica melts at a very high temperature (over 3,000 degrees Fahrenheit), it needs a flux—in the form of an alkaline substance, such as sodium carbonate (soda ash) or potassium carbonate (potash)—to lower the melting point. Additionally, a stabilizer like calcium is needed to prevent damage from water and humidity; it’s likely, however, that early glassmakers added calcium accidentally, using sand that contained broken pieces of shells, a source of lime (calcined limestone).¹ 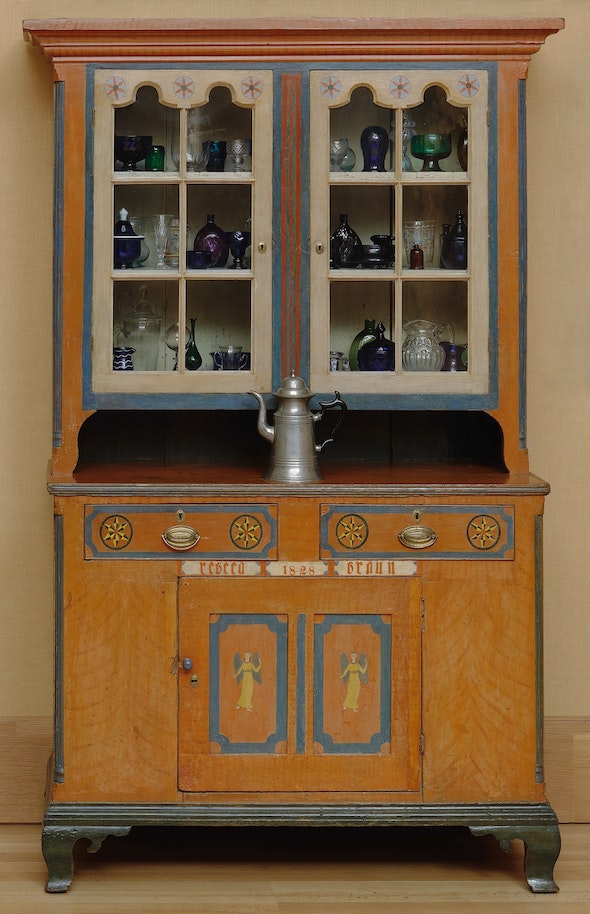 Early glassmakers like the Egyptians heated the raw materials in bowl-shaped crucibles in a furnace (a brick-lined dome built into the ground), producing small, cakelike pieces of glass called ingots. The ingots were sent to other workshops, sometimes quite far away, where they were remelted and molded into new forms. Core-forming was a common technique for shaping glass. A heated core, made of a brittle ceramic-like substance, was placed onto a rod that was lowered into a container of molten glass and manipulated to the desired shape around the core. After the glass was annealed, or slowly cooled to relieve residual stress, the core would be scraped out, leaving a hollow vessel.²

Core-formed and cast glass from the Getty collection. 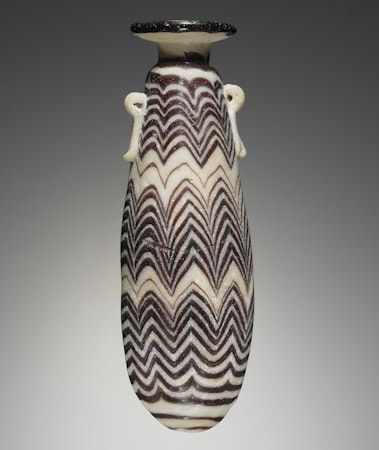 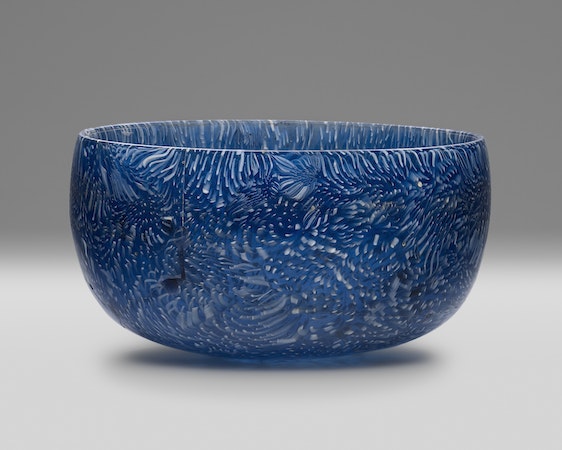 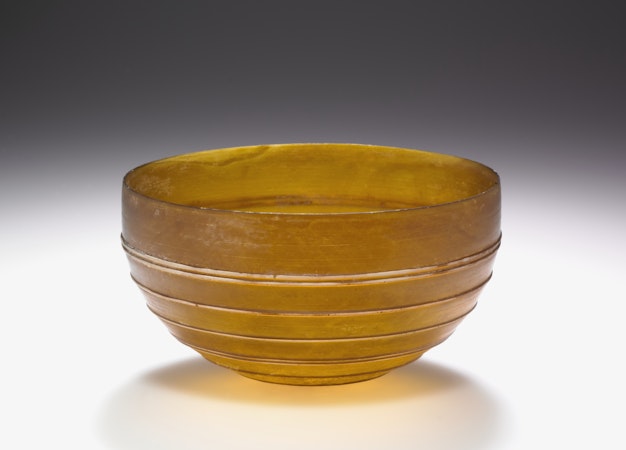 Glassblowing techniques were developed much later, around 50 BCE, near Jerusalem, when glassmakers discovered they could use a hollow rod to inflate molten glass at the far end. This technique produced glass vessels quickly and cheaply, leading to their popularity in household use over ceramic forms. It also allowed for exceptional versatility, encouraging a rapid evolution of styles and shapes, particularly when artisans incorporated molds into the blowing process. Molds were made with stone, clay, bronze, or plaster.³ 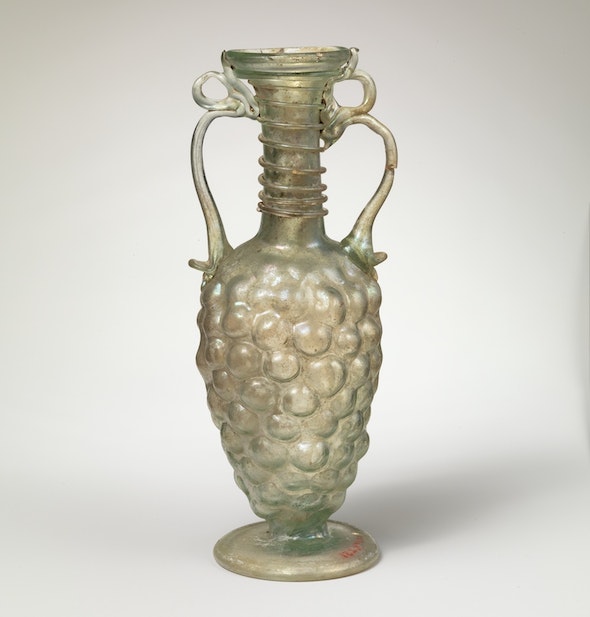 This Roman glass bottle was blown into a mold to mimic grapes.

Now fast-forward about a thousand years to the early American colonies. Did you know that one of the first industries in America was glassmaking? In 1608, a glass workshop was opened in Jamestown, Virginia, after the colonists there realized they had all the raw materials needed for production, along with fuel (firewood). Although unfavorable conditions forced the Jamestown workshop to close not long after its establishment, a series of other workshops opened into the 1700s. The first ones, however, did not produce glass for the colonies but rather exported their vessels to England. Glass for windows and housewares was imported to the colonies, most likely because the small American factories could not meet the local demand.⁴

Trade embargoes in 1806 and 1807 gave American factories a chance to gain a stronger foothold in the glass industry; the War of 1812 also helped the local economy. The boom was short-lived, however; after the war, there was an increased demand for imported glass, particularly cut class from Ireland and England, which was very much en vogue. Many American glass factories that had opened in the lead-up to the war closed during the subsequent depression. It wasn’t until well into the 1820s that the industry began to prosper, due to a growing economy and advances in transportation and distribution methods.⁵

To understand how glassmaking took shape in America, let’s take a look at one of the pieces from the Pennsylvania German cupboard, a mold-blown glass pitcher from the early 1800s (pictured below). 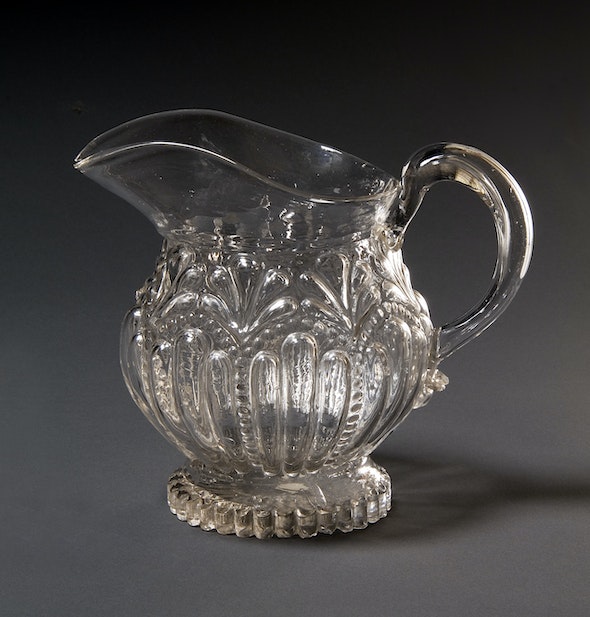 This glass pitcher can be found in Braun's cupboard.

Around the 1830s, American glass companies discovered a way to compete with the cut glass produced by England and Ireland. Cut glass was made from high-quality flint glass, on which its pattern was etched or cut by skilled workers (think Waterford Crystal). Because cut glass was costly to make and required highly skilled workers, American factories could not compete with the larger manufacturers overseas. Instead, they adapted the very old technique of mold blowing (remember, this was developed as early as 50 BCE!) to create a product similar in appearance to the cut glass. They used molds made of multiple parts—usually two to four pieces—to produce vessels known as blown three-mold glass (the majority were three-piece molds, hence the name). Though molds were expensive to make, the high upfront cost was offset by the speed and ease with which the molded glass could be produced. The Barnes pitcher was produced in this manner.⁶

If you’ve ever watched a glassblowing demonstration at a fair or historic site, you probably saw what’s called free glassblowing. Mold-blown glass begins the same way. A glassblower gathers a layer of molten glass onto the end of a steel blowpipe. The glass is then rolled on a marver, a flat metal surface, to make the initial shape and even out the surface. The gather is then inserted into a mold made of multiple hinged pieces and inflated to the edges. An assistant helps the blower to open and shut the mold.

From here, the molded glass is reheated and the initial shape—usually in the style of a decanter—is manipulated to create different vessels, like pitchers or celery vases. The glass may be cut or opened from its original shape and reheated and draped over a cylindrical mold to form a bowl or dish—in this case, the mold is used for pattern only. 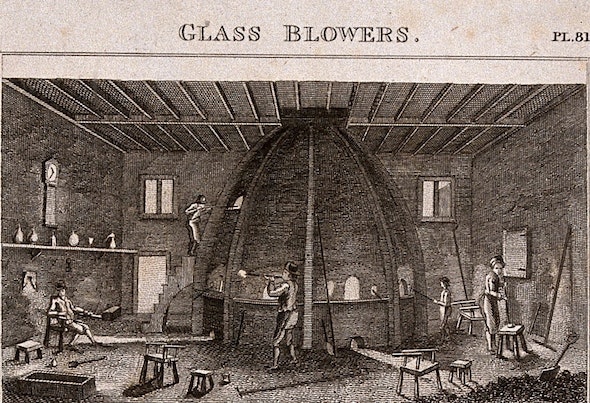 This 1810 print (shown in two parts) details the process and tools behind mold-blown glass. 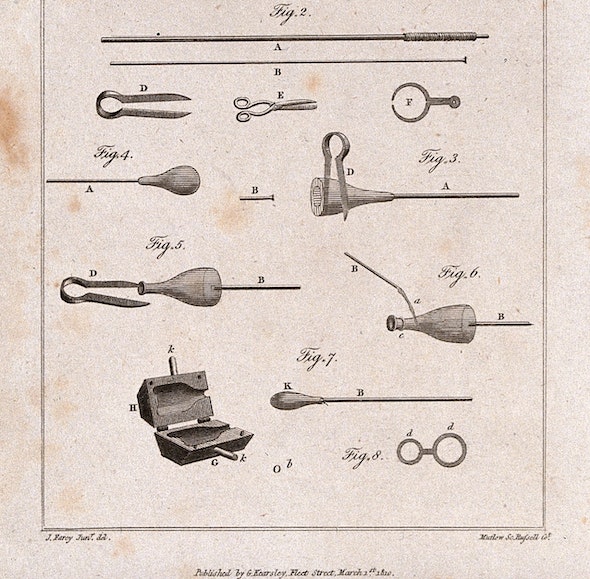 The Barnes pitcher was blown in a two-part decanter mold that was reshaped to create the quart-size vessel. (Fragments of the mold were discovered at the Sandwich Glass Company, founded in 1825 in Sandwich, Massachusetts, allowing us to identify the origins of this vessel.) The foot, or base, was formed in the mold; the handle was blown separately and attached after the pitcher was fully shaped. In vessels like this, small mold marks can sometimes be seen at the edges of the mold pieces where the glass was pushed into the small crevices from the pressure created in the blowing process. The more the glass was manipulated from the initial shape, the less decipherable the marks are. If you could touch the inside of the Barnes pitcher, you would feel the concave-convex relationship with the outer surface, an effect of expanding the glass to fit the mold. Pressed glass, which can look similar in appearance, also uses a mold but results in a flat interior surface.

All blown three-mold glass is categorized into three different style types: arch, baroque, and geometric, with additional subgroups organized by pattern. The design on our pitcher is representative of the baroque style, characterized by elaborate high-relief patterns of hearts, palmettes, guilloche, and trefoils. A 1941 census identified 145 patterns of blown three-mold glass, but many more likely exist. The diversity of patterns reflects the popularity of this glass, which gave less wealthy households access to elaborate glassware. 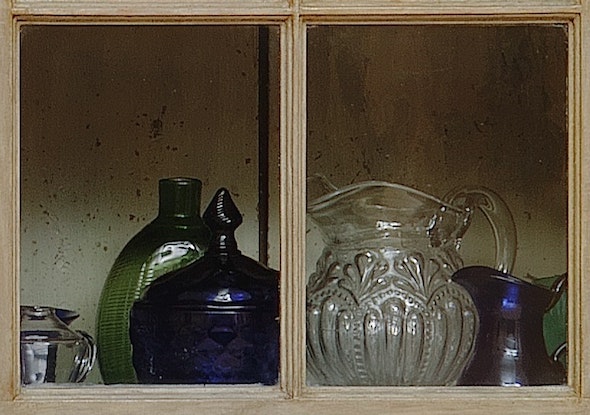 A close look through the window of Braun’s cupboard reveals our mold-blown glass pitcher.

Though there have been many technical and stylistic innovations over glassmaking’s 4,000-year history, the raw materials and basic concept have changed very little. Even in modern mass production, wineglass prototypes are still handblown in molds; the automated process mimics the artisanal.

Next time you’re in Room 18 of the galleries, take a closer look at the glass objects in the Pennsylvania German cupboard on the east wall. Pay attention to their shapes, patterns, and colors, and see if you can figure out how they were made.

⁷ The pitcher’s pattern is in the group GV-6 and is known as Beaded Arch; its base is type III and known was Rayed and Ringed; McKearin, American Glass, 244–246, 321.