If you look closely at the glass cases in Rooms 15 and 16, you will see a group of small bronze animal figurines. These are some of the oldest objects in the Barnes collection, but they often get overlooked, perhaps because of their size (Figs. 1a, b, 2). These tiny horses and bulls were made in the eighth century BCE in ancient Greece, but how did they get to the Barnes Foundation?

Determining the origins of ancient art can be difficult. We want to know the object’s provenance: Did Dr. Albert Barnes buy it in a gallery? Or did his art dealer in Paris pick it for him? We also want to know its archaeological provenance, meaning where it was originally found: Did an archaeologist dig it up at a specific site in Greece? Did someone loot a tomb in Italy and put the contents on the art market? Beyond telling us where an object was found, archaeological provenance can tell us more about when something was made, how it was used, and what it meant to the people who created it. A little bronze horse looks nice on a shelf, but without knowing its original context, we can only appreciate it aesthetically. 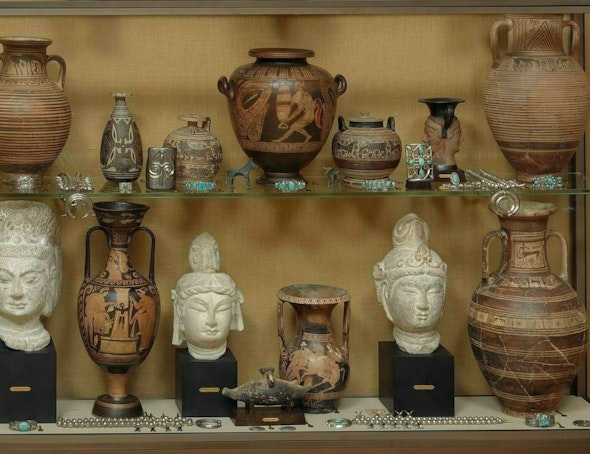 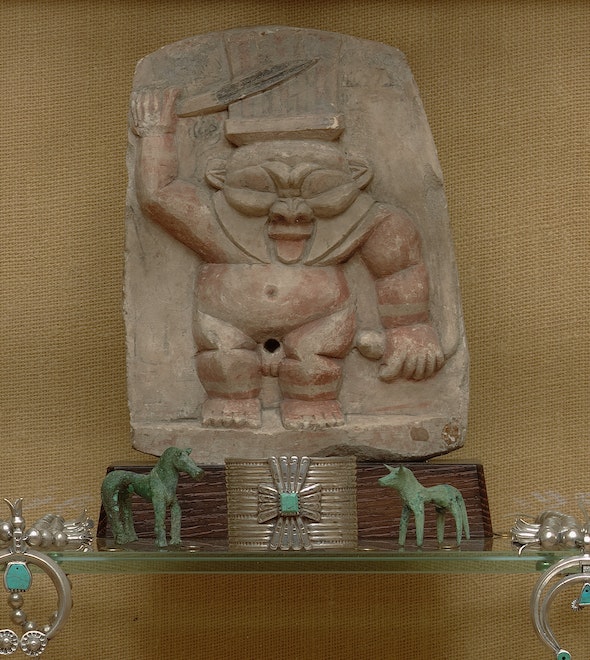 In the 19th and early 20th centuries, no international laws governed the sale of ancient artifacts, and it was common to buy a vase or a sculpture without any questions about its origin. Today, legal restrictions prevent the illicit export and import of ancient art to help preserve a country’s cultural heritage. But many museums and institutions house ancient art that predates these laws, and they often have little information about the work and how it got to them.

Fortunately, the features and material of the Barnes figurines offer hints about their origins. When we lack archaeological context for an object, stylistic comparison is one tool for building knowledge. Does the object share specific features with other ancient artifacts with more established provenance? How does it fit into the larger body of extant artifacts? Do we know the archaeological context for pieces that share similarities with our object? Using this method, we can come up with reasonable hypotheses about an object’s origins.

The Barnes bronze animal figurines were not made in a vacuum and are part of a much larger body of similar objects. In fact, through comparison with other known bronze figurines, we can show that they likely came from the ancient Greek site of Olympia and were made in the second half of the eighth century BCE. 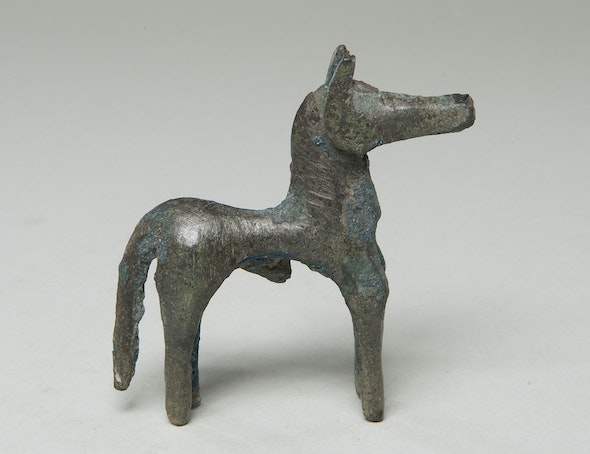 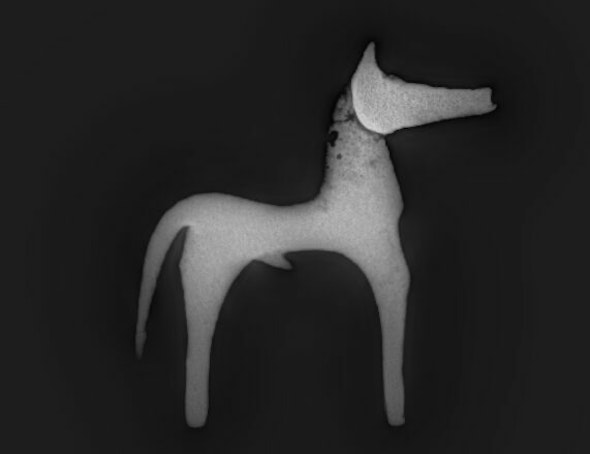 In Room 15, there are four small bronze animals: two bulls and two horses.¹ Room 16 has four horses and one bull.² The animals are displayed alongside ancient Greek vases, Native American silver jewelry, eighth-century Chinese statue heads, and other art objects from around the world. Though the figurines look similar in size, shape, and material, each one is unique, and their features and details can tell us much about where they may have been made and used (Fig. 3).

The horse and bull figurines are all made of bronze, an alloy of copper and tin. They are solid-cast, meaning they were made by pouring molten metal directly into a clay mold; this is evident in the x-radiograph images (Fig. 4).³ They range from 6 to 9.5 centimeters in height.

The horse figurines share many features, including long, straight legs, narrow midsections, and cylindrical heads. Some have specific details, such as a line on the snout to indicate a mouth (Fig. 5) or defined hooves (Fig. 6). One horse stands on a base with an openwork geometric pattern (Fig. 7).

The bull figurines are identifiable by the horns that protrude from their heads, and each set is slightly different. One set of horns points upward from the animal’s ears (Fig. 8), while another extends forward and up (Fig. 9). The third bull has features that have led some scholars to identify it as a deer: short, blunt horns, exaggerated leg joints, and a tail that twists at the end (Fig. 10). Such a misidentification is easy to make if we only compare this object with the other Barnes figurines: it doesn’t look much like the other bulls, so we might assume that it is a different animal. However, research into the larger body of Greek bronze animal figurines has shown that the object is an example of a specific bull type associated with eighth-century BCE Olympia.

Barnes Figurines of Horses and Bulls (Not a Deer in Sight) 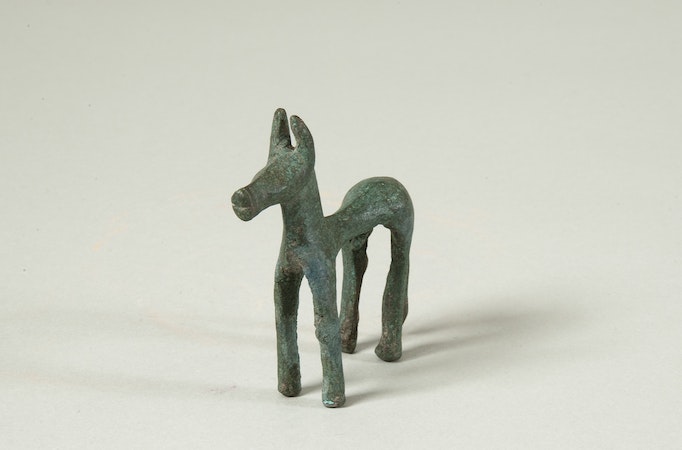 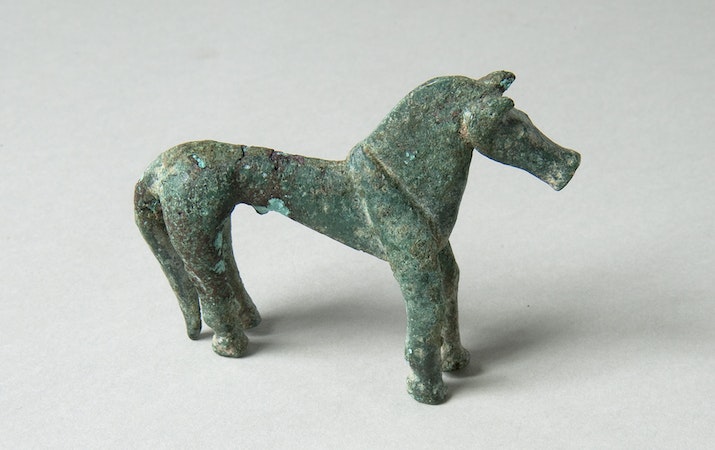 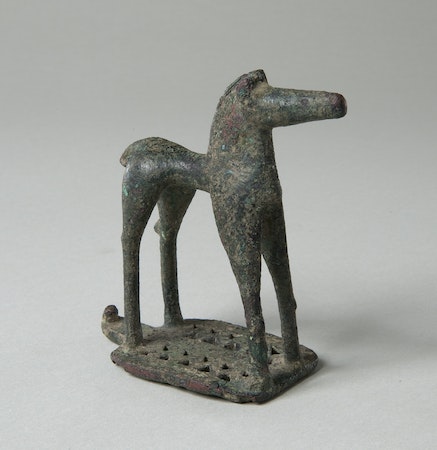 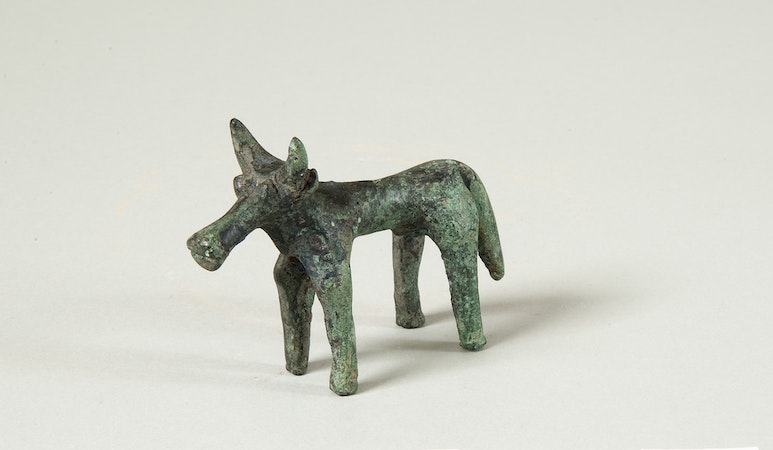 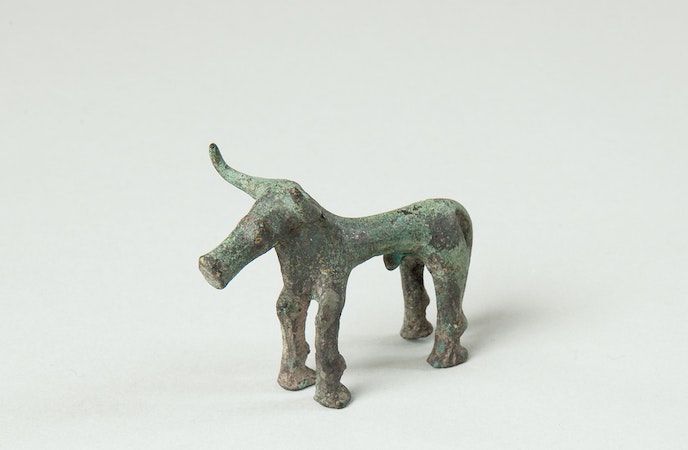 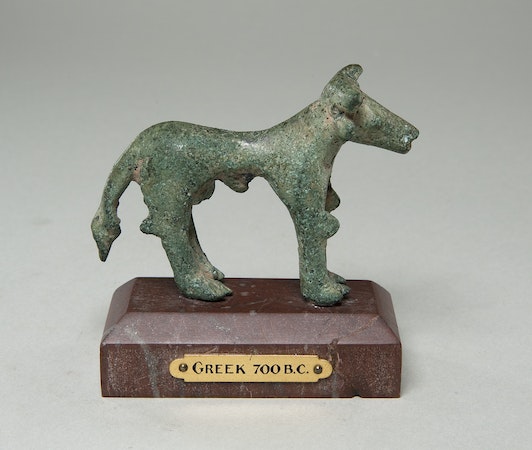 A large number of animal figurines, as well as other objects, have been found at ancient Greek sanctuaries. One of the most prolific sites is Olympia, located in the western Peloponnese and home to the sanctuary of Zeus and the first Olympic Games. More than 2,000 known bronze animal figurines originated at Olympia and date from the eighth century BCE.⁴ These figurines appear in collections throughout the world, but a majority are at the Archaeological Museum at Olympia—sourced from German excavations that began there in 1875, one of the first scientific archaeological digs in history (Fig. 11). 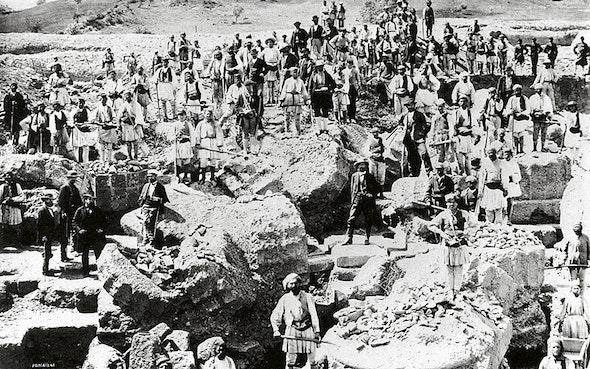 Fig. 11. The excavations at Olympia in the late 19th century. Photo courtesy of the German Archaeological Institute

The German team’s careful record-keeping has given us invaluable information about when and where these artifacts were found, ensuring their archaeological context. The team’s work was meticulously studied and published, making it the first place to look for stylistic comparisons for the Barnes figurines. Flipping through the catalogue entries and photographs proved fruitful, as did reviewing other publications on eighth-century bronze figurines.⁵ For example, our horse with a stand (Fig. 7) closely resembles several bronze figurines found at Olympia (Fig. 12). According to Jean-Louis Zimmermann, an expert on bronze horse figurines, this type is associated with Laconia, a region in the southern Peloponnese. The other horse figurines also have matching counterparts (Figs. 3, 13).

Stylistic comparison of the bulls proved fruitful as well. Olympia produced many bulls in the same style as the Barnes examples, confirming that they were likely made there. The bull with unusual features described above proved to be part of a bull type found at Olympia as well, with characteristic small horns and twisted tails (Fig. 14). Though we cannot say for certain that the Barnes horses and bulls came from Olympia, the presence of similar objects in the archaeological record strongly suggests this origin. 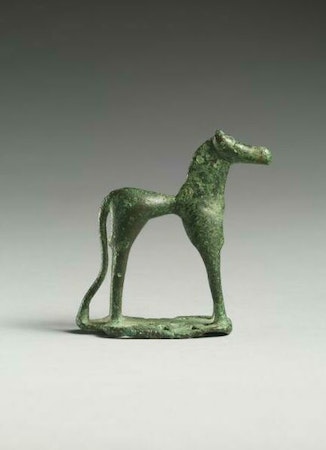 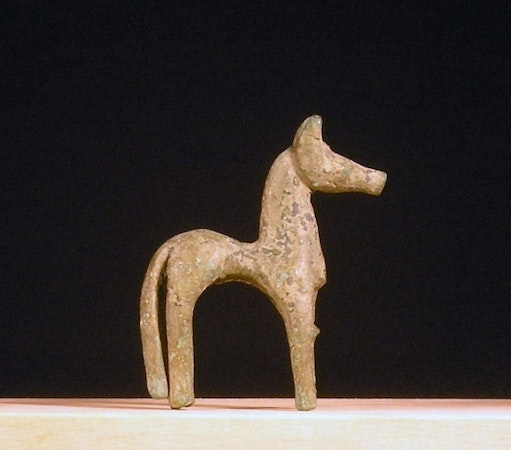 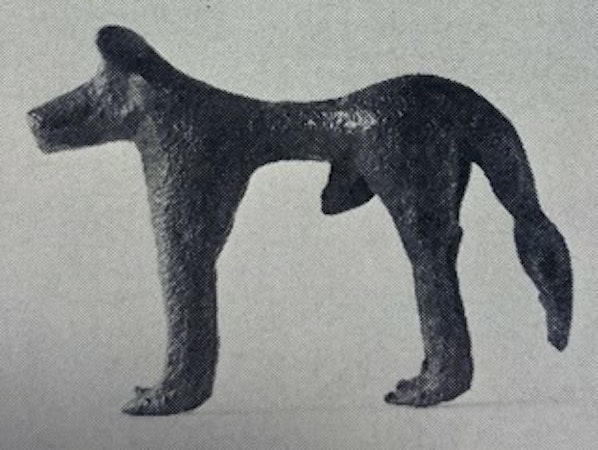 What about modern provenance? While the Barnes objects likely came out of the ground at Olympia, the next chapter of their story is a mystery. The archive at the Barnes offers some idea, however, of how a few of the figurines came into the collection. According to an invoice dated June 4, 1937, from Ernst Ascher, an antiquities dealer in Paris, Dr. Barnes bought a group of seven bronze animals for 6,500 francs (Fig. 15a, b).⁶ The invoice does not describe the figurines, though, so it’s unclear which ones were part of this transaction.

It is rare that researchers can trace an object from its findspot in the ground in Greece or Italy to the art market to the museum. Often, for ancient objects, we make best guesses based on the limited evidence we have. Sometimes, however, there are lucky surprises. As recently as 2021, archaeologists found a bronze bull figurine sticking out of the ground near the Temple of Zeus at Olympia.⁷ Heavy rains exposed the tiny bull and brought it to the surface, directly connecting the past to the present. 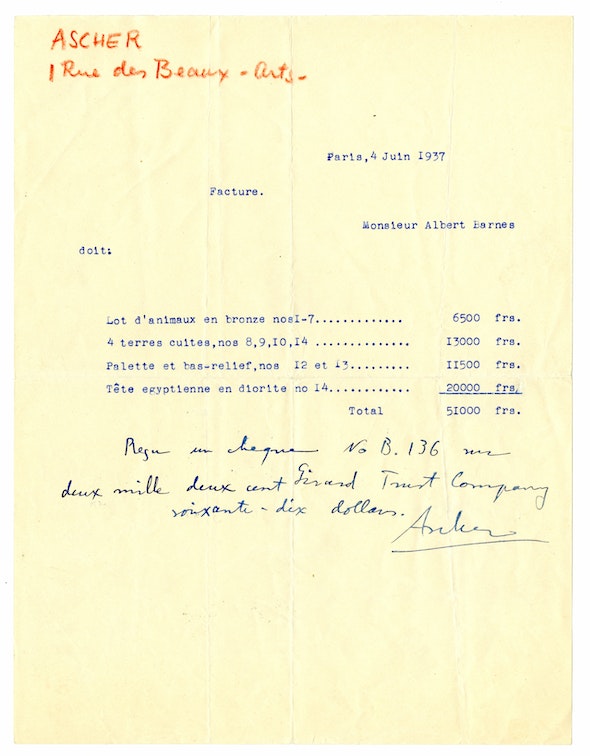 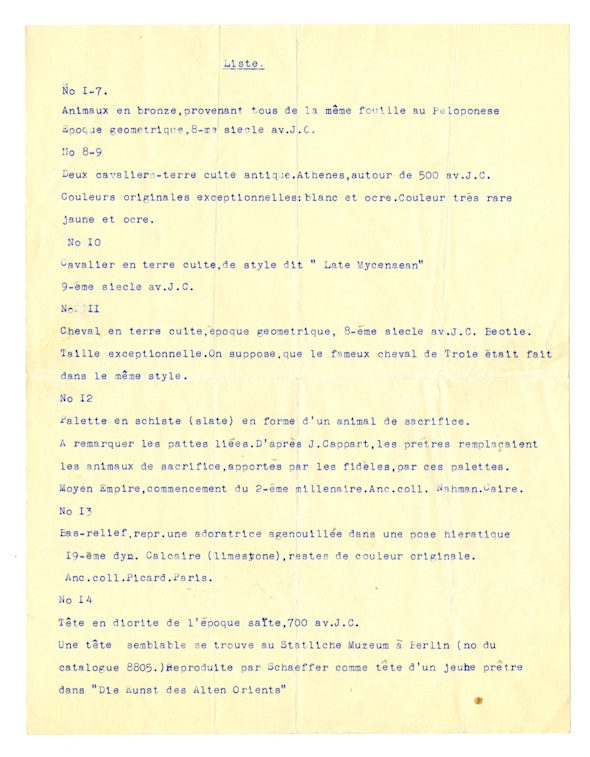 At the Barnes Foundation, the figurines are displayed on shelves in glass cases, where they can be admired and observed alongside sculptures and paintings. But is this how they were appreciated in their original context? Today, the figurines are considered art objects, but this concept would be foreign to the people that created them. Unlike paintings, which are made to be shown and admired, these figurines had specific functions. Indeed, this is true about most objects from the ancient world.

Olympia was a major Panhellenic sanctuary, where people from all over the ancient Greek world would gather to demonstrate their devotion to the gods. Of course, the city was also home to the Olympic Games, the first of which is said to have taken place in 776 BCE. Before, during, and after the games, people would participate in religious rituals that included sacrifices, performances, and the giving of gifts to the gods. Though Olympia was primarily dedicated to Zeus, the ruler of the Olympian gods, other deities were worshipped there as well.

There is evidence of ritual activity at Olympia from as early as the tenth century BCE, though it reached its peak in the fifth century, with the erection of a monumental temple for Zeus (Figs. 17a, b) with a famous gold-and-ivory statue by the sculptor Pheidias.⁸ The sanctuary was littered with hundreds of large-scale statues dedicated to Zeus, to commemorate Olympic victories or give thanks to the gods. 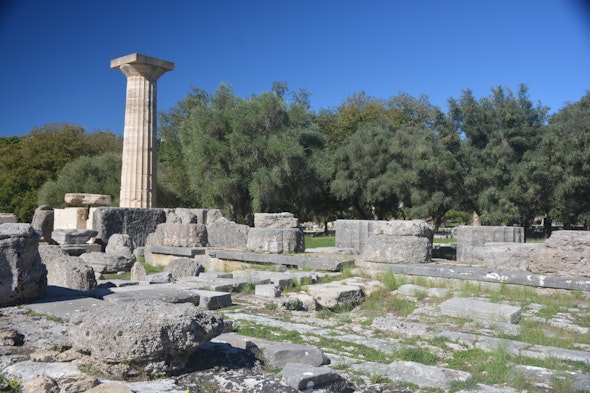 Fig. 17a. Remains of the Temple of Zeus at Olympia. Photo by Madeleine Glennon 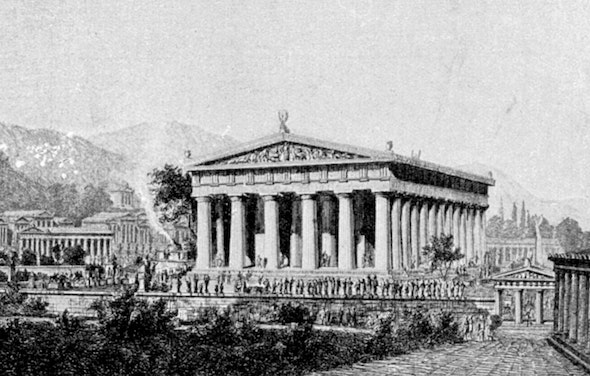 Fig 17b. Wilhelm Lübke. Illustration of the Temple of Zeus in the fifth century BCE, c. 1908. Public Domain.

In the eighth century BCE, however, visitors would dedicate small bronze figurines to the gods (Fig. 18), along with shields and tripods (a three-legged vessel used in offerings), leaving them at an open-air altar in the sanctuary, alone or often as decoration on a tripod. The animal figurines were made for this specific purpose; bronzeworkers would produce them in workshops in Olympia, and visitors would buy them and deposit them in the sanctuary.⁹ Each little horse and bull represented a plea for future divine favor or gratitude for a positive event, such as a successful crop. These figurines did not sit on shelves—they were actively used to honor the gods. In this way, they differ greatly from the other pieces of art on display at the Barnes.