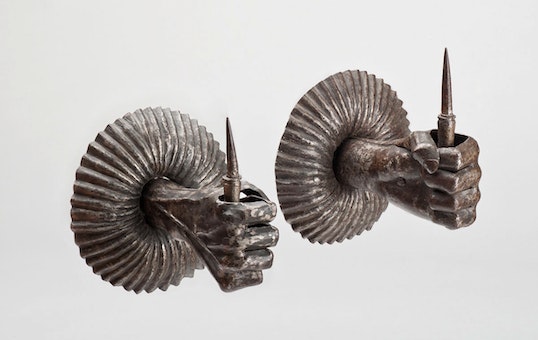 Dr. Albert C. Barnes underscored the formal affinities these objects shared with the "motives and arabesques" in the paintings in his Gallery, neither identifying individual objects nor explaining their use. Often he combined disparate objects—shoe buckles and door hinges, ladles and hasps—to create new forms. In a 1942 letter to the American artist Stuart Davis, Dr. Barnes noted that the anonymous craftsmen of such functional items was “just as authentic an artist as a Titian, Renoir, or Cézanne.”

This exhibition explored the fabrication, function, and intricate ornamentation of approximately 150 masterworks from the Musée Le Secq des Tournelles, Rouen. They ranged in date from the Middle Ages to the early 20th century, and they showed that iron is unexpectedly versatile, with its capacity to convey both masculine heft and an impossibly fragile delicacy that is hard to square with its industrial image. Objects ennobled with silver and gold inlays elevate iron—it's more than base metal. Some are deadly serious in their efficacy; others delight as much by their wit as by their exquisite intricacy—locks that represent their own function, for example, one with a built-in faithful guard dog or one with spring-loaded manacles ready to catch a lock-pick—an 18th-century sign in the shape of a greyhound that looks like something Calder might have made two centuries later, an early electrified bat-shaped night-light.

Assembled in the 19th century by Jean-Louis-Henri Le Secq Destournelles (1818–1882), the celebrated photographer of French architectural monuments, and his son Henri (1854–1925), the Le Secq collection was shown to great acclaim at the Exposition Universelle in 1900 and installed until the 1920s at the Musée des arts décoratifs in Paris. In the early 1920s, Le Secq acquired the deconsecrated church of Saint-Laurent in Rouen, where he lived and arranged his extensive collection of European and Middle Eastern objects by type, in distinctive, often symmetrical wall arrangements and in custom-made vitrines. Dr. Barnes, who traveled frequently to France as he built his collection, is believed to have visited Rouen to see this impressive holding. The exhibition was accompanied by a catalogue containing an essay on Dr. Barnes's collecting of metalwork, one on the collection at Musée Le Secq des Tournelles, short essays on groups of works, and an illustrated glossary of technical terms.

Strength and Splendor: Wrought Iron from the Musée Le Secq des Tournelles, Rouen was sponsored by:

The contributing sponsor was:

With generous funding from the William Penn Foundation.

This project was supported in part by a grant from the National Endowment for the Arts.

National Endowment for the Arts

Additional support for Strength and Splendor: Wrought Iron from the Musée Le Secq des Tournelles, Rouen was provided by the Jill and Sheldon Bonovitz Exhibition Fund.