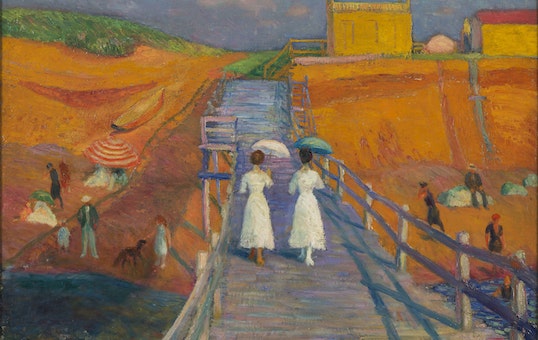 The first comprehensive survey of William Glackens in almost half a century, this exhibition included nearly 90 major paintings and works on paper from some of America's finest private and public collections. Glackens’s influential career spanned five decades and this exhibition showed a new generation the breadth of his oeuvre, displaying key works from each decade of his career and revealing his enchanting zest for life, as well as his arsenal of sophisticated techniques. Several important canvases and works on paper were on public view for the first time.

The exhibition was highly selective, concentrating on the most pivotal, adventurous, accomplished, and distinctive works, including the magisterial At Mouquin’s (1905) and The Soda Fountain (1935). Several works in the Barnes collection were included in the exhibition. A joyous and pure painter, Glackens also served as an advocate for the development of avant-garde art in America through his participation in the landmark exhibitions of The Eight (1908), the Armory Show (1913), and the Society of Independent Artists (1917).

Albert C. Barnes and William Glackens attended Philadelphia’s prestigious Central High School together. When they renewed their friendship in 1911, Glackens encouraged Dr. Barnes’s appreciation of modern French painting. Glackens went to Paris in 1912 on a buying trip, sending back works by Paul Cézanne, Vincent van Gogh, Pablo Picasso, Pierre-Auguste Renoir, and others. The men remained close, and Dr. Barnes became his most important patron and acknowledged his friend’s importance to his collecting endeavors: “The most valuable single educational factor to me has been my frequent association with a life-long friend who combines greatness as an artist with a big man’s mind.”

William Glackens was sponsored by:

with generous funding from the Sansom Foundation and the William Penn Foundation.

William Glackens was organized and presented by Nova Southeastern University’s Museum of Art | Fort Lauderdale, the Parrish Art Museum, and the Barnes Foundation, with pan-institutional support from the Sansom Foundation, the Henry Luce Foundation, the National Endowment for the Arts, Vontobel Swiss Wealth Advisors, and Christie’s.

The exhibition was supported by an indemnity from the Federal Council on the Arts and the Humanities.