Fig. 1. West wall of Room 4 of the Barnes Foundation, detail of ensemble.

Did you know that we are always trying to learn more about our art collection? The Barnes has a team of curators, scholars, conservators, and archivists who actively research the treasured works on view in our galleries. We work continually to link collection objects to their original histories, and almost every day we uncover something new—from small details like when a piece entered the collection, to larger discoveries like unknown sketches on the backs of two Cézannes!

We also study our own history as an institution. The Barnes archives, with material dating back to 1902, is a wealth of information about works in the collection—and about the ideas and people that formed it.

Barnes Research Notes presents some of our most recent discoveries and interpretations. Read the newest entry below, and keep scrolling for past notes.

On Room 4’s west wall, beneath a 15th-century Chinese scroll painting, two iron bands hang side by side (figs. 1, 2, 3). Each features alternating motifs of palmettes, mascarons (grotesque masks), and column capitals formed of spiky acanthus leaves. Dr. Barnes labeled these bands as Roman, presumably because of their resemblance to architectural ornament. In 2002, however, scholar Richard J. Wattenmaker revisited the objects. Wattenmaker, who had studied at the Barnes under Violette de Mazia and later pioneered scholarship on metalworks and American art in the collection, identified the bands as fragments of an early 16th-century sanctuary screen from the church of St-Béat in Southern France (figs. 4, 5). This puts their date of manufacture close to that of the Renaissance door knockers and plates displayed on the wall above them.¹ 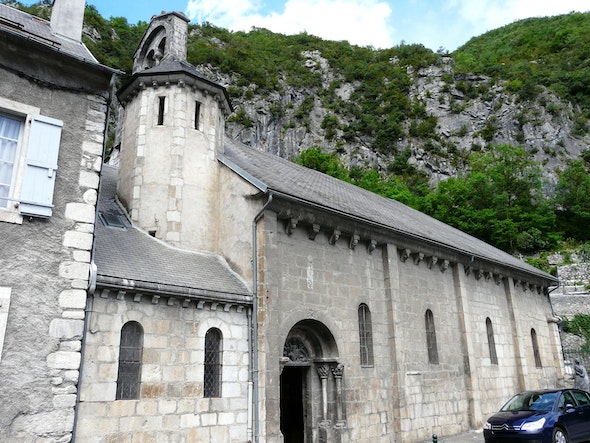 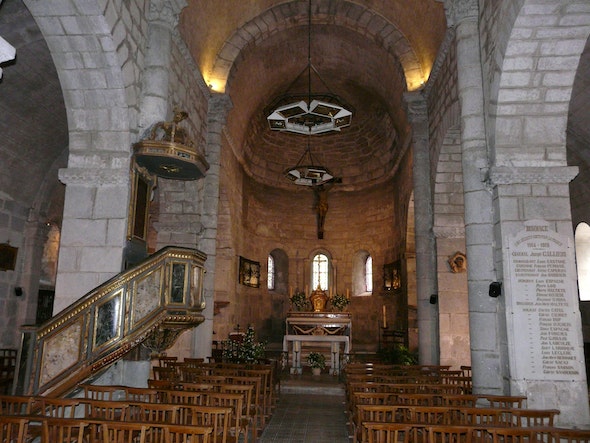 Wattenmaker’s attribution seems to be correct. The internal screens at St-Béat vanished long ago (see fig. 5), but a survey of standing monuments, museum fragments, and antiquarian literature affirms that iron screens abounded in churches during the 15th and 16th centuries.² In southern France, for instance, extant screens protect the sanctuaries of the abbey church St-Sernin in Toulouse, the parish church of St-Ebons in Sarrancolin, and the side chapel of the Holy Sepulchre at St-Saturnin in Belpech (figs. 6, 7).³ Most of these screens feature a series of vertical bars held together with entablatures (horizontal bands) of cut-and-pressed sheet metal. The Barnes bands resemble versions from Spain, as witnessed in the book Spanish Ironwork by Arthur Byne and Mildred Stapley (fig. 8), perhaps due to St-Béat’s proximity to the Spanish border and/or the destruction of French material during the French Revolution. 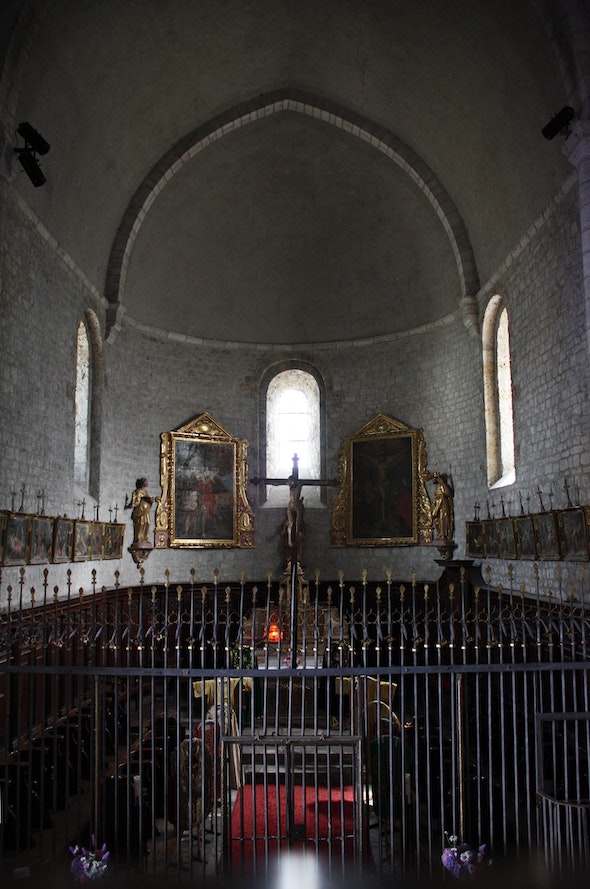 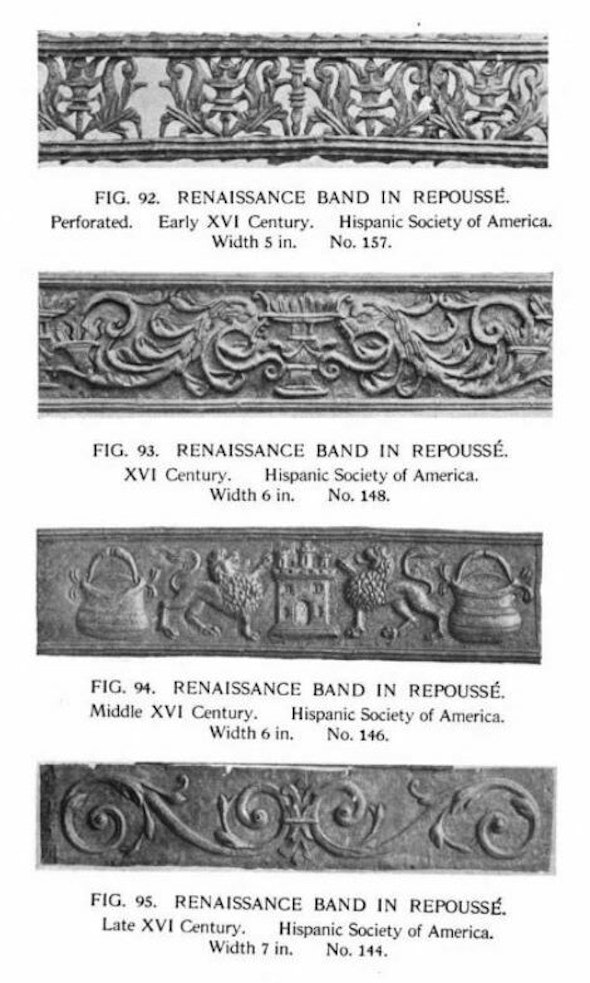 Still, the strongest evidence that the bands come from St-Béat is the appearance of an identical iron band in the church’s north aisle—part of a 20th-century grille sheltering the tomb of Saints Béat and Privat. Documentation presented in the 1930s by Lucien Vignes suggests—but doesn’t prove—that the bands were repurposed in the 1770s to fashion a new baldachin, or canopy, for these saints’ relics when the sanctuary was remodeled (also a likely occasion for the dismantling of a sanctuary screen). Or, perhaps the baldachin is a red herring, and the bands were simply stashed somewhere in the church.⁴

Let’s consider the Barnes bands within the history of St-Béat. A Benedictine monastery was established in the eighth century; it passed into the authority of the priory of St-Pierre-de-Lézat in 1003.⁵ The monks’ “ancient rights and privileges” were restored in the 12th century, and the building’s construction began in 1132.⁶ The monastery was dissolved in the 14th century, and the site became a parish church administered by prieurs and curés (essentially, rectors).⁷

Today, the church retains its 12th-century Romanesque form. The two-story stone structure features three semicircular apses, a four-bay nave with side aisles, and barrel vaulting that spring from columns and pillars carved with checkerboard patterns, grape vines, palmettes, and human and animal figures (figs. 8, 9). The entryway, on the south side, opens onto a relief sculpture (also 12th-century) representing Christ in Majesty surrounded by the tetramorphs. A 16th-century bellcote with two arcades rises above the west facade; perhaps a sanctuary screen was set up during this same period?⁸ 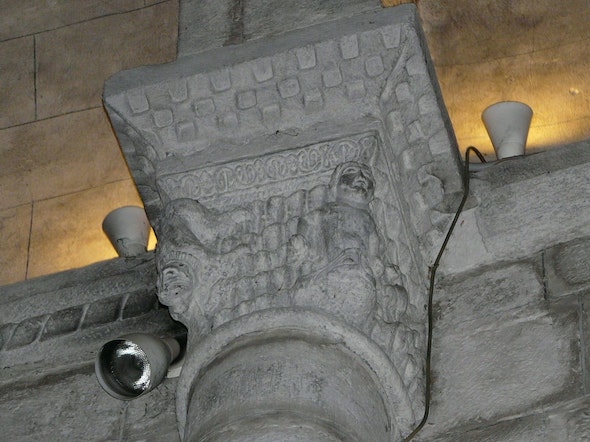 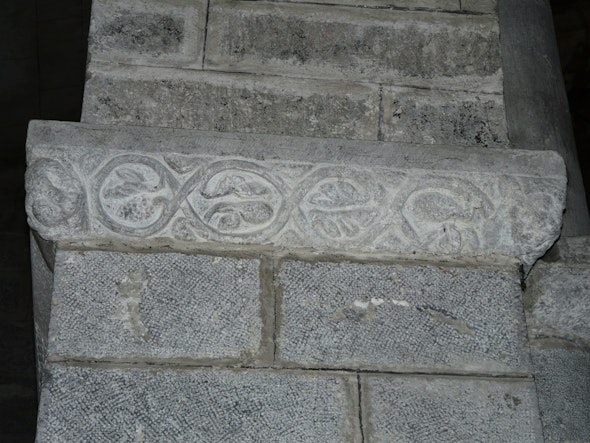 If so, the Barnes bands’ allusions to Roman ornament may have honored the church’s Roman-era patron saints. They would, in this case, have built upon the meanings of the existing 12th-century architectural sculpture just described—while also engaging with new Renaissance art from Italy.⁹ Additional symbolism might be found in the bands’ leafiness (possibly referring to the life-giving properties of the sacraments, and the eternal life enjoyed by Christ and his saints) and masks (signifying the act of looking or the state of liminality). Moreover, these objects would have effected a nesting of styles: a Renaissance entablature in a Gothic screen in a Romanesque church. A framework for understanding the layers of architectural ornament can be found in Ethan Kavaler’s book Renaissance Gothic, in which he observed:

Ornament serves many functions: symbolic, communicative, and aesthetic. It can set up successive screens in front of august monuments, endowing vision with mystery . . . It can set up a hierarchy of decorative motifs that the eye charts as a means of establishing some higher order to the structure.¹⁰

Kavaler’s analysis underscores a further point: in the later Middle Ages, screens helped address “modern” devotional and artistic needs within older church buildings. They might divide liturgical spaces; provide opportunities for patrons to flex their piety, status, and taste; or protect private areas while still inviting the public to observe.

To this point, recent scholars of medieval art suggest that worshipers generally understood mass not as an esoteric priestly performance but as a rite unifying them with God, the church, and one another.¹¹ The central event—the priest’s elevation of the consecrated Eucharistic host—was dramatized by ceremonial elaborations: the central gate of the choir screen might be opened, bells rung, candles lit, and a dark curtain drawn behind the altar to increase the host’s visibility.¹² 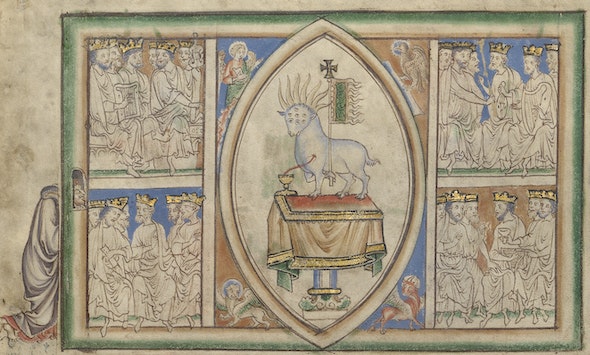 Paul Binski writes that sanctuary screens “lay at the threshold of a two-way movement, optically in a form of ‘sacramental viewing’ into the chancel, and conversely of the Mystery [of transubstantiation] moving out to meet those in the nave. . . . Partial concealment, like partial clothing, acts to heighten imaginative value and attractiveness.”¹³ To explain this perhaps surprising analogy, Binski references Jean-Paul Sartre’s book Being and Nothingness (1943): “Although I would not for one moment propose an existentialist agenda for the study of the parish church, Sartre has interesting things to say about a consciousness which becomes the thing regarded brought about by the use of a keyhole. Phenomenologically speaking, when seen through a [screen], the Host is, for a moment and in quite a particular sense, the ‘ultimate object.’”¹⁴ This echoes St. John's mystical Vision of the Lamb (fig. 10).

Additionally, Binski’s invocation of Sartre is a useful reminder that the St-Béat iron bands have been agents of aesthetic experience in postmedieval context. It follows that modern and postmodern interpretive frameworks may illuminate phases of their long lives—such as their display at the Barnes (see fig. 1).

The west wall ensemble of Room 4 reveals striking visual affinities between works of art made, for the most part, in late medieval or early modern Western Europe and East Asia. On the left side, a noblewoman from Qing Dynasty China (BF80) and her neighbor Saint Bartholomew (BF833), wielding the knife with which he was flayed, wear rich brocade robes that contrast with monochrome backgrounds (fig. 11). On the right, in a devotional panel made in Siena, Italy, around 1370 (BF792), stippling gives texture to the halos and the Virgin Mary’s “cloth of honor” (fig. 12). Dr. Barnes may have wanted visitors to compare this technique with the egg-and-dart motif wreathing a French Renaissance door-knocker plate nearby (01.04.65) and ethereal sylvan setting of a scroll painting from 15th-century China (BF81) (fig. 13). 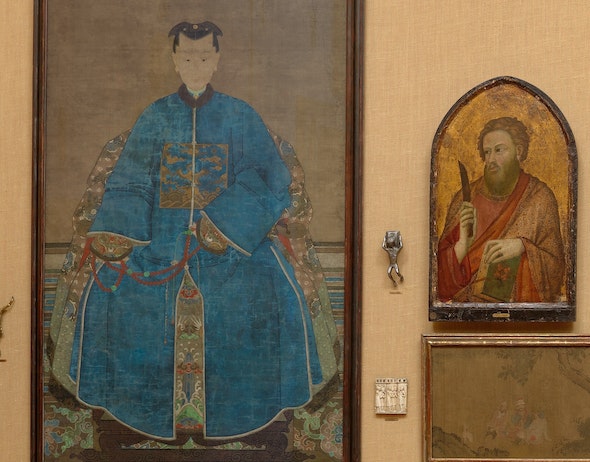 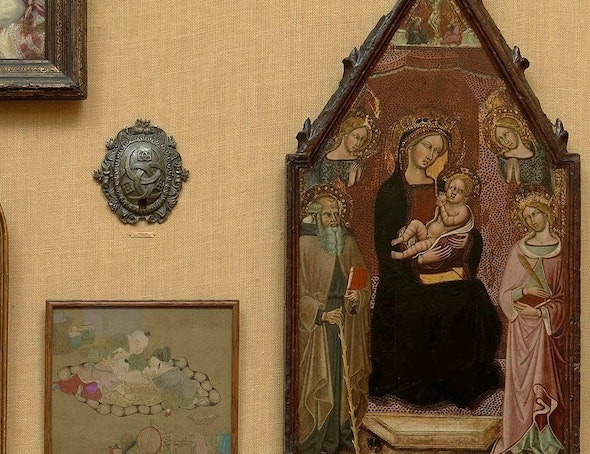 Dr. Barnes began collecting metalworks while working with his friend John Dewey on the book Art as Experience in the 1930s.¹⁵ Dewey is usually labeled a pragmatist philosopher, though he preferred “cultural naturalist” to signal the reconstruction of philosophy for a Darwinian, not idealist, worldview.¹⁵ Aesthetic experience, he and Dr. Barnes argued, is not an abstract, transcendent phenomenon but part of the everyday lives of all perceptive human beings. Likewise, they fleshed out the premise that good works of art—no matter the context of their making or purpose—can bridge the experiences of their makers and those who engage seriously with the works’ visual qualities, even centuries later.¹⁶ As a result, the two iron bands seem to fulfill the same essential function at the Barnes as they did at St-Béat—contributing to the process of learning to see.

¹ Richard J. Wattenmaker, Barnes Foundation Collections Assessment Project (2002), 5. He stated, additionally, that the two rectangular holes in each band were cut well after they were made, perhaps to reuse them as a part of another object (such as a strong box). For the scope and history of the metalworks collection at the Barnes, see “In the Light of New Material: The Place of Antique Wrought Iron in the Collection and School of the Barnes Foundation,” in Strength and Splendor: Wrought Iron from the Musée le Secq des Tournelles, Rouen (Philadelphia: The Barnes Foundation, 2015).

² See especially Raymond Lecoq, Classic French Wrought Iron (New York: W. W. Norton, 2005), 54. Also, Arthur Byne and Mildred Stapley wrote of Spanish screens’ entablatures: “In Renaissance days not merely one, but two or three [horizontal members] made their appearance in the same composition and assumed the importance of a frieze, thus responding to the increased height and importance of the verticals. In Gothic days bands had generally been of open work; those now under consideration were more often solid and beaten in repoussé. Figures 92–95 [on page 71, Hispanic Society nos. 144, 146, 148, 157] are examples taken from small rejas.” In Byne and Stapley, Spanish Gothic Ironwork (New York, 1915), 73–78.

⁵ In addition to the account by Vignes, see Bulletin archéologique et historique de la société archéologique de Tarn-et-Garonne 20 (1992): 218–22. The authors (unnamed members of the society) compare it to the church of St-Juste-de-Valcabreres, speculate on a relationship of the architectural sculpture with Spanish design, and describe the Louis XVI altar as “pompous.”

¹⁰ Kavaler argued, moreover, that the juxtaposition of Gothic and Renaissance styles could clarify their proper expressions: “Modern was, in fact, the usual word for the Gothic in France, Spain, and the Netherlands, though what constituted this modern changed also from generation to generation. By the second decade of the [15th] century, Gothic and Italianate inventions might appear side by side as indexes of the multiple stylistic solutions possible.” Ethan M. Kavaler, Renaissance Gothic: Architecture and the Arts in Northern Europe, 1470–1540 (New Haven: Yale University Press, 2012), 5.

¹² Reinburg 1992, 533. Devotional guides and images (e.g., the Mass of St. Gregory) signaled that the elevation of the host and chalice represented Christ crucified. For more about the Eucharist, see Miri Rubin, Corpus Christi: The Eucharist in Late Medieval Culture (Cambridge: Cambridge University Press, 1991).

¹⁴ Binski 1999, 14, quoting from Jean-Paul Sartre’s Being and Nothingness (1943), trans. Hazel E. Barnes (London: Routledge, 1993), 259. “Let us imagine that moved by jealousy, curiosity, or vice I have just glued my ear to the door and looked through a keyhole. . . . I am a pure consciousness of things, and things, caught up in the circuit of my selfness, offer to me their potentialities as the proof of my non-thetic consciousness of my own possibilities. This means that behind that door a spectacle is presented as ‘to be seen,’ a conversation as ‘to be heard.’”